D4N
A butterfly adds poetry to the D4

For her interpretation of a Bauhaus piece, Kerstin Bruchhäuser chose the unpadded D4 chair by Marcel Breuer. Designed as a versatile solution “for ships, patios, summer houses, gardens, garden cafés, etc.,” the collapsible tubular steel lounge chair with fabric straps made its first appearance in 1927. Already an icon, Breuer’s mobile D4 has been part of the Permanent Collection of the Museum of Modern Art (MoMA) in New York since 1980. For her version, Kerstin Bruchhäuser decided to leave the tubular steel frame of the D4 as it is, in order to focus on the design of the textile surfaces – seat, back and armrests.

Over the course of three months she created an elaborately hand-sewn patchwork, using the traditional Korean pojagi technique. Fabric scraps are sewn together using a distinctive seaming technique that makes the back and front look almost identical. This results in a fabric that is aesthetically pleasing from either side.

As a reference to the four basic colours, Bruchhäuser chose four shades for her fabric: yellow, green, blue and pink. “Following the Bauhaus philosophy, I deliberately restricted the patchwork to four colours,” she explains.

The used fabric scraps have global roots: Some are from Tecta’s workshop in Lauenförde. Another fabric comes from German army backpacks she found in a second-hand military supplies store in Los Angeles. The blue patches are from old jeans, teamed with an old Japanese kimono fabric to create a symmetrical pattern.

The heart of her patchwork is a butterfly on the kimono fabric, right in the centre of the D4’s seat, from which the entire pattern unfurls. The fabric scraps are arranged in perfect symmetry; being sewn one on top of another by hand there are always slight shifts. “This creates an exciting contrast: The supple fabric with its slightly offset seams is pulled onto this super straight and shiny steel tube,” explains the Hamburg-based designer.

Kerstin Bruchhäuser, born in 1974, lives and works in Hamburg. From 1999 to 2005 she studied illustration and communication design at Hamburg University of Applied Sciences (HAW). This was also when she started creating her first textile images. In 2009 she embarked on a doctorate in art and design at Weimar’s Bauhaus University, which she completed with a PhD. Her thesis was on the topic “Text on Used Textiles in Contemporary Art”.

Numerous exhibitions in Berlin, Hamburg and Weimar as well as scholarships at the Bauhaus Research School have since marked her path.

A period of living in Los Angeles from 2005 to 2007 had a great influence on her textile, artistic work, which is also widely acknowledged there. In 2018 Kerstin Bruchhäuser is featured in the exhibition “The World of Frida“ in Walnut Creek, California. Since 2014 the designer has also been a lecturer for textile design at HAW Hamburg.

How did the cooperation with Tecta come about?
Kerstin Bruchhäuser: My connection with Tecta goes way back. Through a family relationship with Axel Bruchhäuser and Christian Drescher. I recently talked about the Korean pojagi sewing technique, which I use to create large textile works. I sew portraits out of old white fabrics. Christian and Daniela Bruchhäuser were very interested in this technique and came to visit me in my studio in Hamburg. They asked me right away if I would like to reinterpret a Bauhaus chair using pojagi.

What happened then?
Kerstin Bruchhäuser: I chose a chair from the Bauhaus series that I wanted to redesign: the D4 club chair by Marcel Breuer. I like this chair because it has no padding. You can see the front and back. That makes it perfect for pojagi.

What makes pojagi so special?
Kerstin Bruchhäuser: It is a traditional Korean patchwork style where pieces of fabric are sewn together in a single layer. So it looks almost identical from either side: The patches are joined together without any open seams or fringing. A normal “patchwork quilt” is open-backed – you always have to add a backing fabric. With their visible seams pojagi cloths evoke stained glass windows and religious art. At the same time, pojagi fabrics have something mundane about them. Their purpose is rather a pragmatic one, teamed with a spatial and aesthetic effect. They are traditionally made out of fabric scraps. So their past lives also make the cloths very interesting and significant. Pojagi cloths are used in many different places: as curtains for windows or doorways. But also as wrapping cloths to transport food. Hanging the cloths against the light will infuse the room with pools of colour. The aspect of sustainability plays a role in many ways – but it’s all very subtle.

So you found it easy to add pojagi to the chair?
Kerstin Bruchhäuser: I discarded the first two designs while I was sewing. The patterns were unsuitable. I normally create very large images, two by three metres. There you have more creative freedom and flexibility. If a piece of fabric doesn’t fit in one place, you can move it somewhere else, like a puzzle. But that wasn’t possible with the Breuer chair, as it has some very narrow parts, such as the armrests. I noticed that many ideas I had for the seat did not work and that the pattern had to be smaller. So at my third attempt I came up with the symmetrical pattern that I have now used.

Were there any coordination meetings during the project or did you have complete freedom to work on your design?
Kerstin Bruchhäuser: I created the pattern myself and selected the fabrics. The seat, arm and back rests were sewn by hand. Highly intricate work and very time-consuming. Because the patchwork on the D4 becomes part of the chair and doesn’t hang down, there is of course no play of light and no impact on the room. But the conspicuous seams remain. At the joins between the fabrics they are partly sewn in four layers. This results in a multi-dimensional, relief-like surface of the seat.

Do you see a specific reference to the Bauhaus in your redesign?
Kerstin Bruchhäuser: The Bauhaus Nowhaus project focuses on the Bauhaus legacy. In my case the design by Marcel Breuer, which is still very much up-to-date. I pay tribute to that with the pojagi technique. By joining together something old – the fabric scraps – to create something new. Developing something new with the help of traditional techniques is a classic Bauhaus concept.

How does it feel when you change an iconic design?
Kerstin Bruchhäuser: It is very ambivalent. Both a blessing and a curse (laughs). You feel lots of respect. Because the original chair is simply perfect. I have been familiar with the D4 since I was a child. I know what Marcel Breuer was thinking. At the same time, it is a great honour to be able to create a new approach. To have the freedom to rethink this sacred piece, even to be allowed to desecrate it a little. 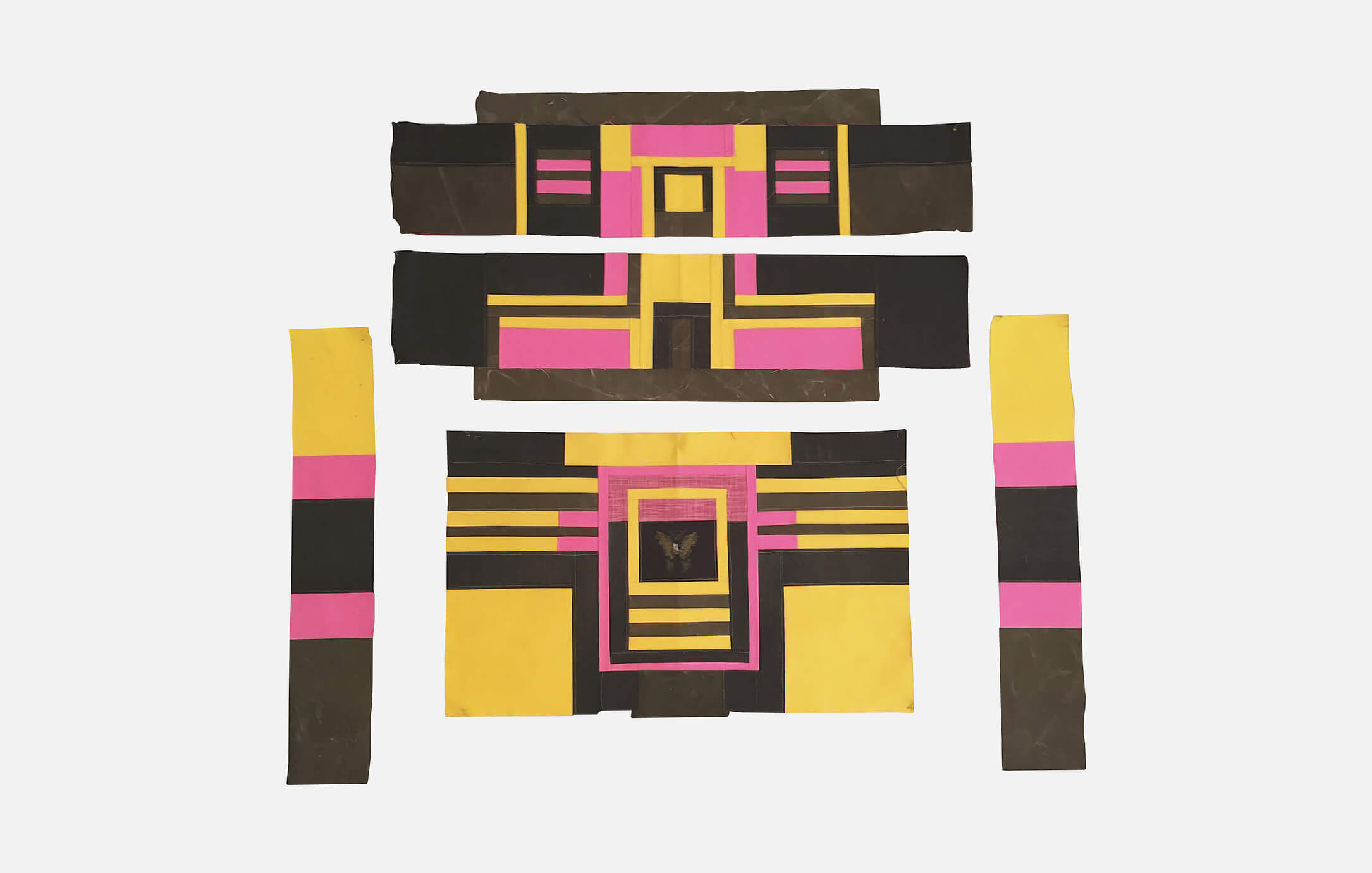