Never before has tradition been as valuable as it is today. Tecta is synonymous for the Bauhaus movement – but with a forward-thinking approach. Lauenförde lies along the undulating banks of the river Weser. For over 40 years avant-garde designers have flocked to the town with a population of 3,000: be it British architects Alison & Peter Smithson, Ludwig Mies van der Rohe, Sergius Ruegenberg, Jean Prouvé, Stefan Wewerka or the great Bauhaus thinkers such as the Gropius family.

Today the family business is managed by Christian Drescher in the fourth generation.  Tecta’s mission and responsibility is to preserve and review the best ideas and designs of modernism as created by the Bauhaus movement in Weimar or Dessau. In addition, we are driven by the desire to think forward, enhance and adapt them.

Once you have identified and understood a problem, you can solve and develop it further – that’s evolution. We find new approachesin innovative materials and techniques, for example. Trends are now interchangeable, while cycles are becoming shorter and shorter. We believe that constantly replacing products is unecological and uneconomical. Our mission is to lengthen the lifespan of good designs, both from a social and ecological point of view.

Tecta unites craftsmanship, values and family tradition with the Bauhaus school of thought. This is what makes the company so unique with its cycle of developing and cherishing what the Bauhaus movement once taught and merged with traditional craftsmanship. Both today and yesterday. 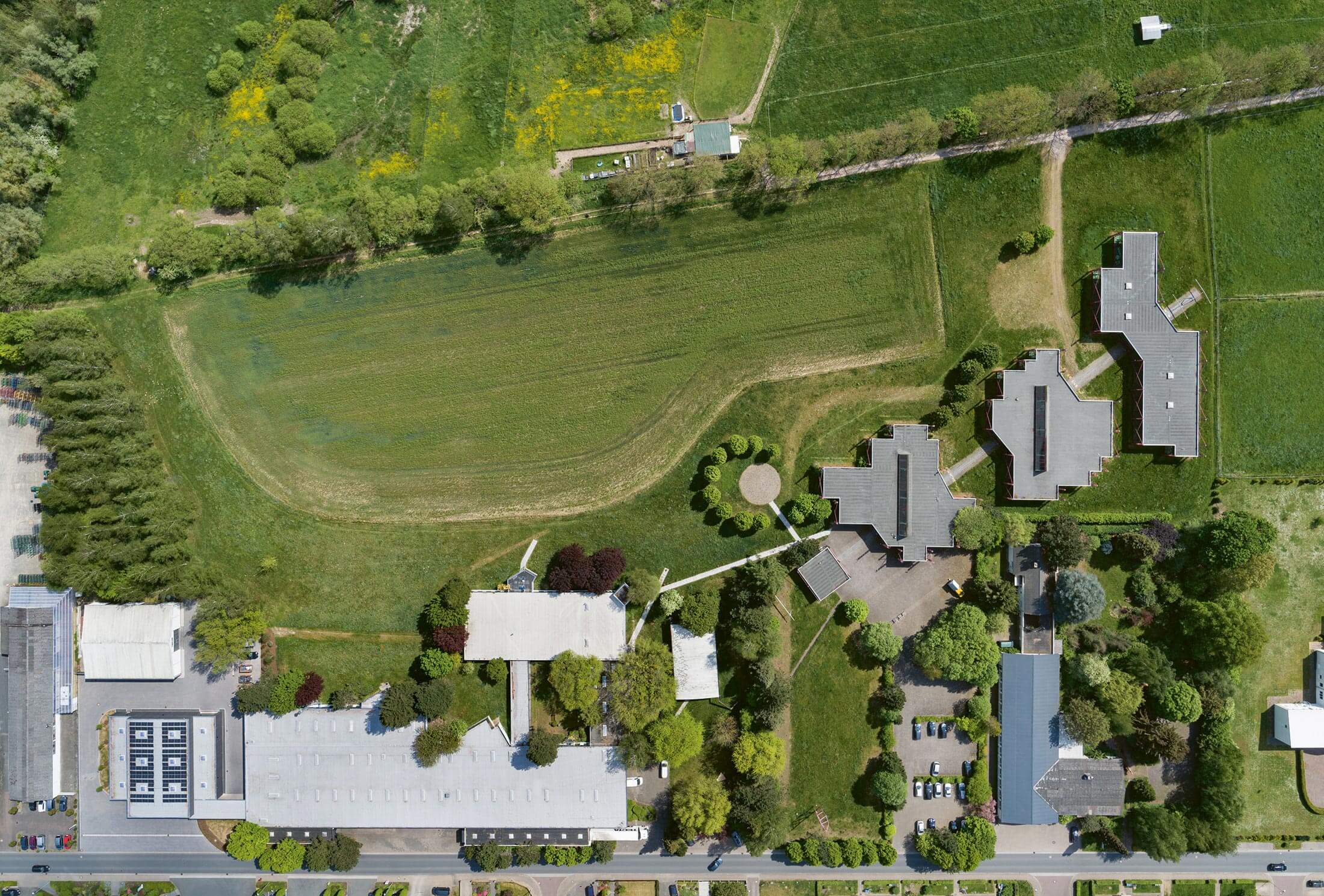 The name Tecta connotes technology and, more generally, the Greek concept of techne: things conceived, made possible and created by man, offering benefits both physical and spiritual. The company produces essential modern design, but it is not just a manufacturer: it discovers, invents, explains, mediates, excites, and breathes new life into material things. Its products show that modernism began not with Art Nouveau, but much earlier, in the Prussian classicism of Karl Friedrich Schinkel, whose cast-iron garden seat influenced the structure of Ludwig Mies van der Rohe’s Barcelona chair. Schinkel’s creation reveals the hidden rationale and poetry of design: it is an event in its own right rather than part of a continuum, a reflection of a historical truth. As Nikolaus Pevsner has pointed out, the pioneers of modern design were active around 1800, building open-plan warehouses with curtain walls. And then came the cantilever structures of Schinkel’s outdoor furniture, which opened up space rather than enclosing it, and thus made a crucial but unacknowledged contribution to modernism.

Tecta consistently reissues designs from De Stijl and the Bauhaus, not so much to keep these two famous names alive as to combine construction with a new language of form. This is techne in its original Greek meaning, the unity of design, beauty and the act of creation, which is why the act of crafting things by hand still plays such an important part in Tecta’s mass production. When, in 1923, Walter Gropius urged the Bauhaus to forge a new symbiosis of art and technology, he was formulating his own version of techne. So the Cantilever Chair Museum is not a collection of classic modern design, or a history of twentieth-century furniture. It is a place of ideas, and of things that redefine standards of quality for today.

The museum is devoted to the many possibilities of a single structural principle: the cantilever, in which tensile forces are made visible by intersecting surfaces. Its inherent asymmetry is characteristic of modernism: the principle of the unsupported beam is at work in contexts as diverse as bicycle handlebars, arm movements in gymnastics, and Mart Stam’s cantilever chair, which influenced those of Mies van der Rohe and Marcel Breuer. In architecture, we see it in Erich Mendelssohn’s flying roof and J. J. P. Oud’s balconies, two early examples that broke down the boundaries between interior and exterior. Neoplasticist and constructivist painting, too, achieves equilibrium between conflicting and asymmetrical two- and three-dimensional forces.

The new typography movement, which creates asymmetry by shifting white space away from the central axis, is the graphic equivalent of the cantilever principle. The use of ragged margins, which began in Switzerland during the 1950s, can be seen as a free, non-hierarchical arrangement of text. So Tecta is devoted to the assembly, production and distribution of the modern, which relates not only to style as sanctioned by art historians, but also to the exploration of the new. Instead of treading well-worn artistic paths, and very much in the spirit of techne, it discovered the great French designer Jean Prouvé, collected furniture and building components, reissued classic furniture, developed new solutions in collaboration with Prouvé, and published its findings. And it was ultimately forced to give up its rights to a rival, a not uncommon occurrence in the history of twentieth-century design.

Tecta’s next designer, the artist and architect Stefan Wewerka, was the antithesis of Prouvé. The company transmuted his distorted but entirely logical constructions, which are well represented in the collection, into usable objects. A utopianist who wanted to cut the Earth into pieces and reassemble it differently, Wewerka was both an advocate and a critic of modernism. He was a member of Team Ten, a young and informal group within CIAM, the twentieth century’s most important association of modern architects.

Axel Bruchhäuser financed his engineering degree in Dresden partly by making wire mesh chairs from materials he used in his studies. He discovered that Wewerka’s creations had the potential to become objects in their own right, non-hierarchical chairs and tables that still influence many furniture designers. Wewerka also created the Prouvé-influenced Tecta Pavilion, and introduced Bruchhäuser to his Team Ten colleagues Alison and Peter Smithson, who redesigned the company’s site. Here again, it is abundantly clear that Tecta makes no distinction between large and small projects, devoting equal care and attention to all of them. The Smithsons are responsible for a yellow look-out in the site’s courtyard, the Cantilever Chair Museum itself, numerous alterations to the headquarters building, and products including seats, a table that opens up like a flower, and containers for knick-knacks. The couple once wrote that when they were young, they designed the house of the future so that it would gradually become the house of the present. In many ways, this is also true of Tecta’s designs.

Jörg Stürzebecher was born in 1961, and lives in Frankfurt (Main). He writes and teaches on the history and theory of design, semiotics, and Tecta, including texts for Gunter Rambow, Cinétique. Currently he lectures at Stuttgart and Ulm.

Approaching Tecta’s factory and museum along the quietside street in Lauenförde – a small town of 3000 on the banks of the river Weser, fourty kilometres north of Kassel – the first thing you see is a 15-metre high red lattice tower. This steel structure signifies the new museum. On turning, one sees the spider-like Wewerka-Pavilion boarding the meadow. At the opening ceremony in 1985 Alison Smithson had, according to Bruchhäuser, given “a fantastic speech which no one understood”. 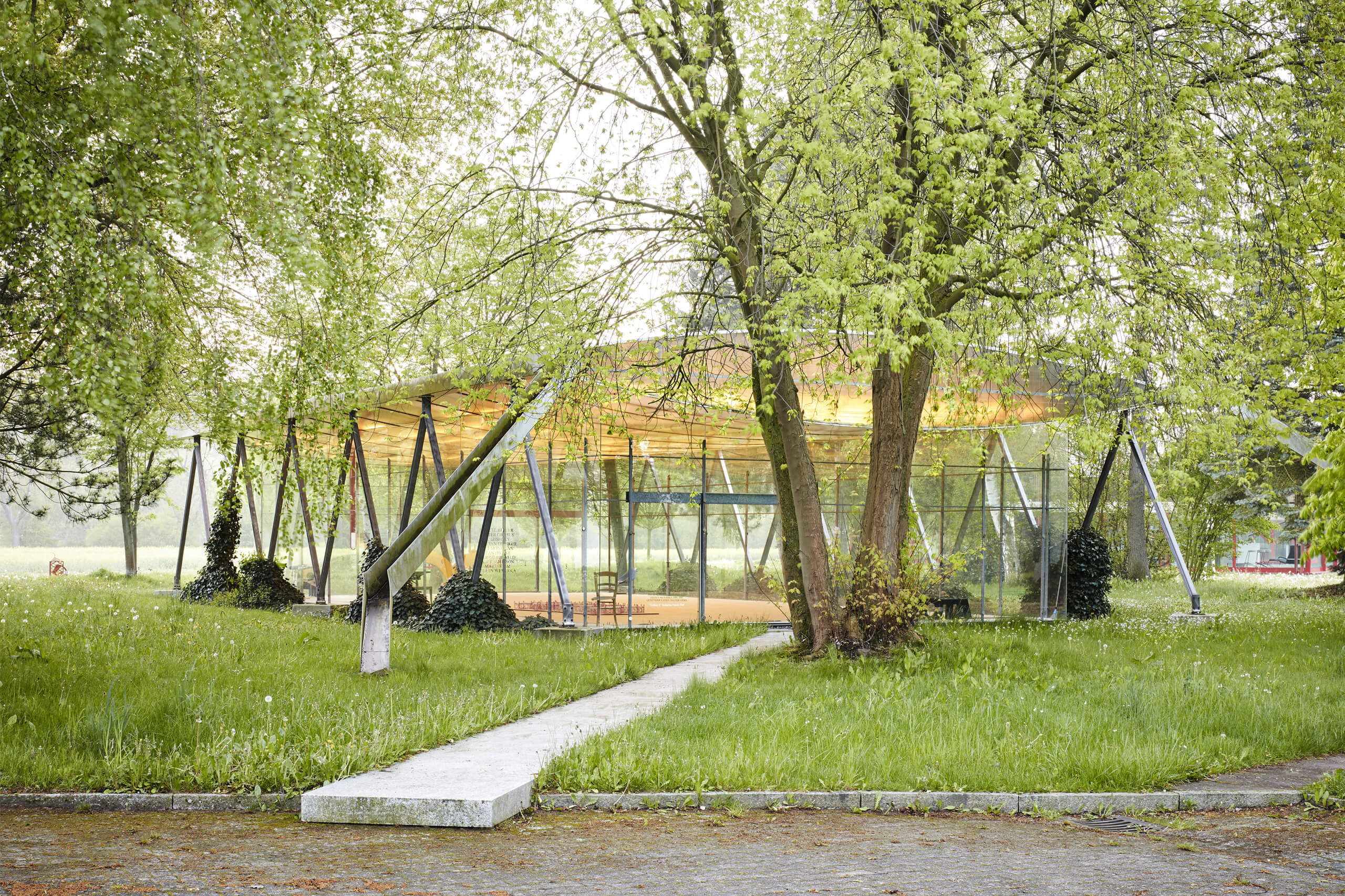 This is to my mind one of the most integral and authentic collections of design that exists, one that reflects a joining of the vision of the original designers with that of Axel himself, a man who understands modern design as an ongoing tradition of discovery, invention, and patient research, as Le Corbusier would say.

Emerging onto the edge of this field from the factory – “like fingers onto the landscape,” says Peter Smithson – are the Sewing Room porch, the Weaving Room porch and the Metal Workshop porch. Providing rest and recreation areas for Tecta’s workers. All open directly onto the meadow. With its smells of sawn wood, cut metal, leather, lacquer and so forth, you could navigate the Tecta factory in a blindfold: walk outside and you were met by the smell of newly-cut grass. It is this kind of contrast and relief that Tecta wants his workers to enjoy. 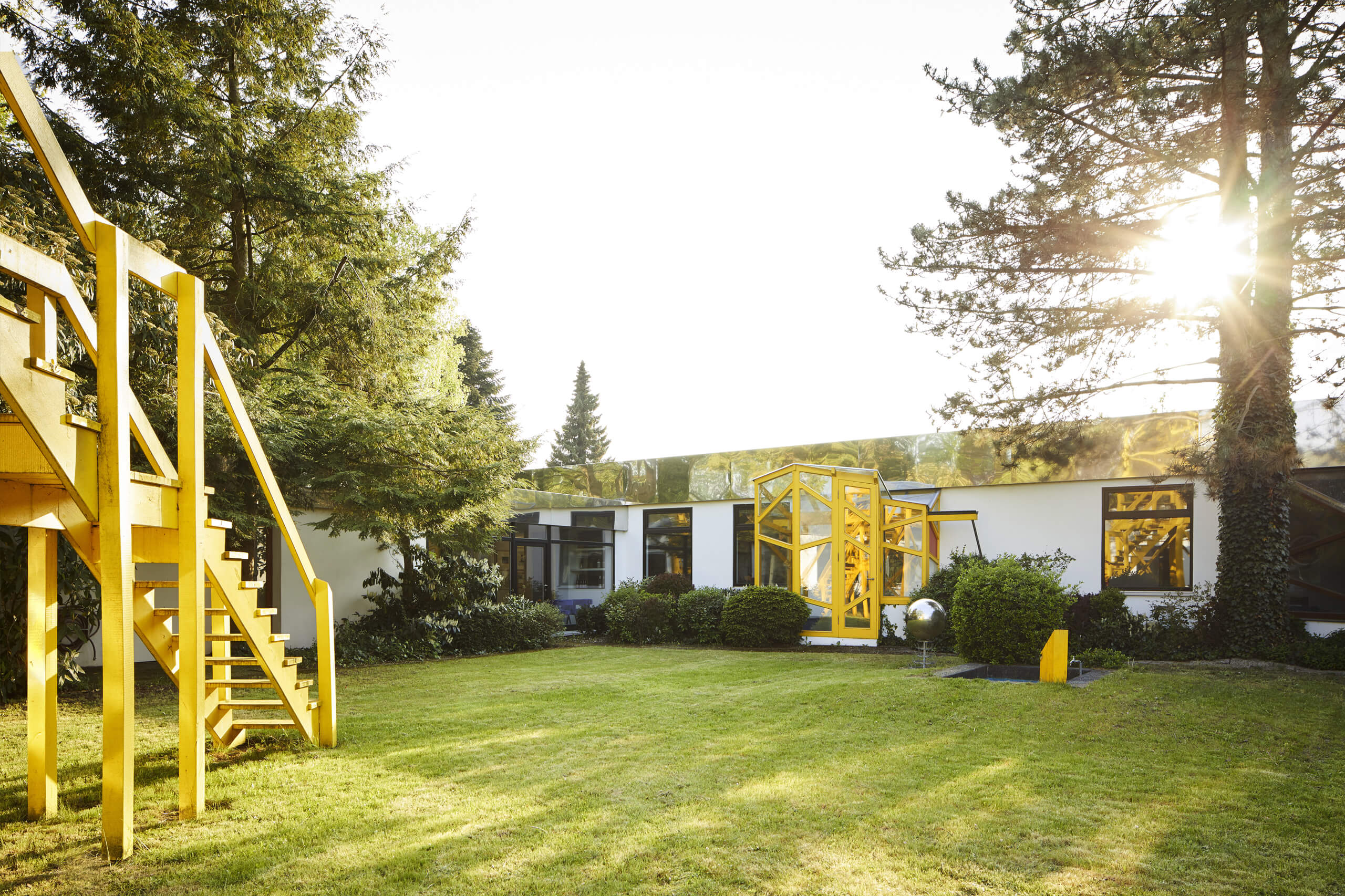