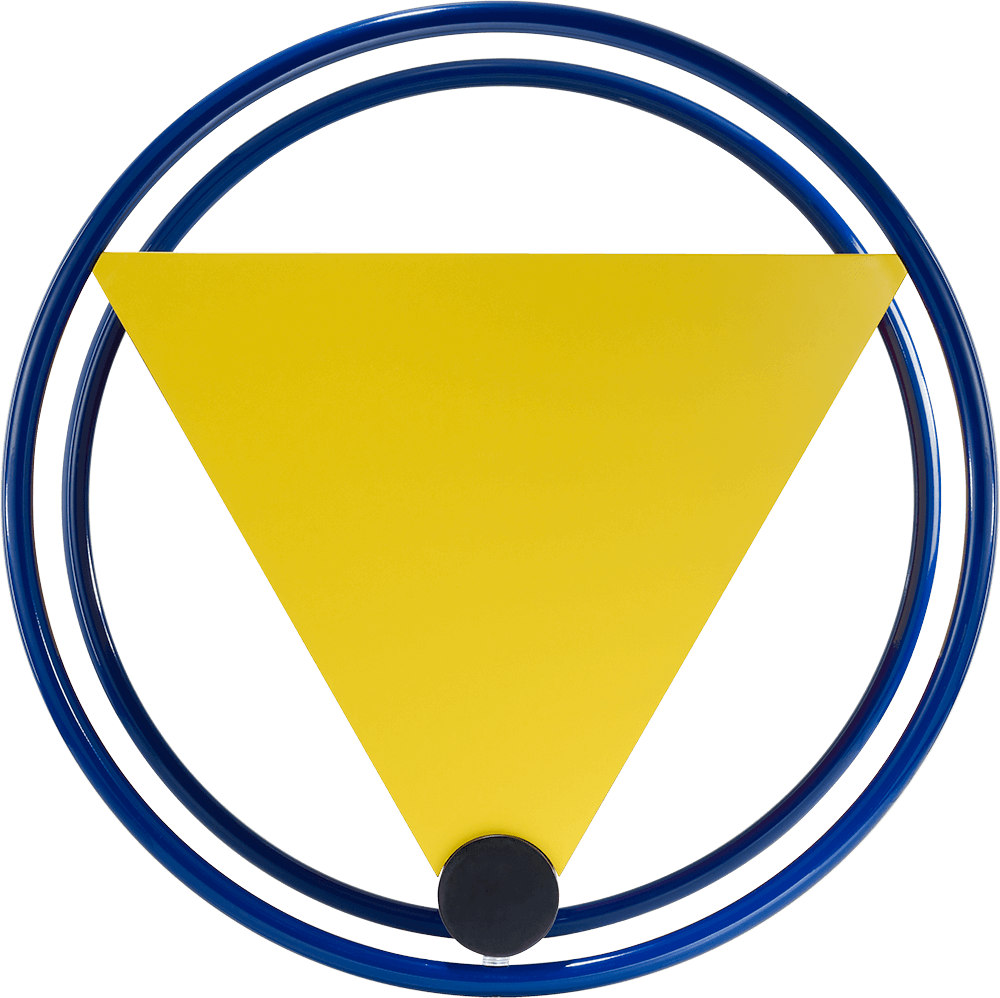 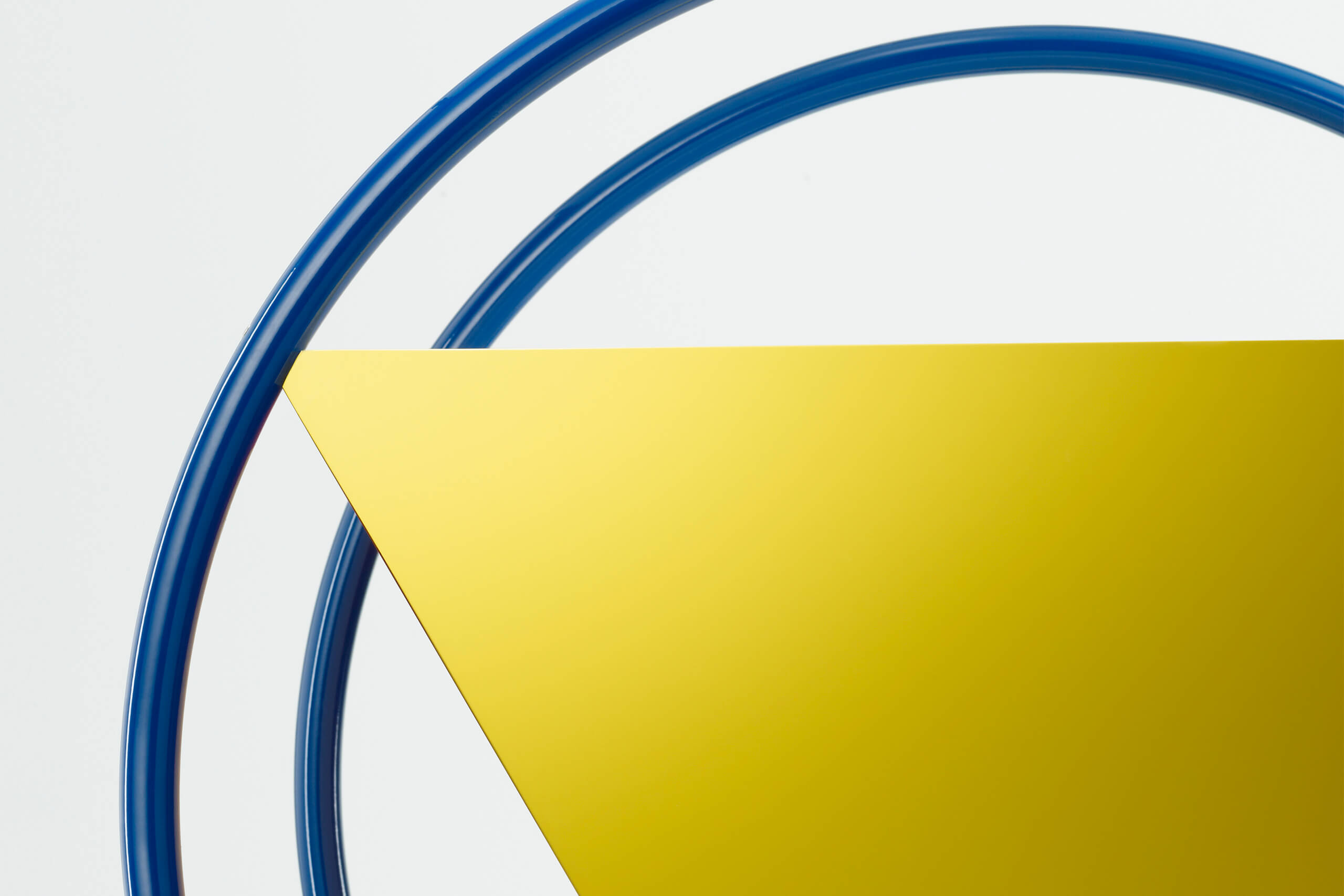 At first glance, it seems like a break with conventional ideas of a cradle: Peter Keler’s cradle design dates back to the beginnings of the Bauhaus in 1922. Consisting of a blue circle, yellow triangle and red square, it makes tangible the influence exerted by the synaesthetic colour theory of teacher Wassily Kandinsky on Peter Keler. At the same time, it embodied the first idea of a floating, rocking and rolling object that became a symbol of the Bauhaus. It was originally intended for a furniture competition initiated by Walter Gropius to design beds for a man, woman and toddler.

The man’s bed had a square headboard and footboard, while the woman’s version described a soft semicircle. The child’s cradle complemented the two geometric shapes with a triangle.

Axel Bruchhäuser’s first contact with Peter Keler and his cradle was in 1975, when he asked for permission to produce the piece. Together with Peter Keler, Tecta implemented the faithful re-edition of the famous Bauhaus cradle based on Wassily Kandinsky’s theory, but by industrial means.

Today the cradle is considered an icon. Peter Keler himself described it as a work that “became the symbol of the Bauhaus.” Keler, who studied painting, colour design and carpentry at the Weimar Bauhaus, wanted to pay tribute to the formal language and mission of the Bauhaus: to revive the arts and crafts and break down the barrier between artist and craftsman.

According to Keler’s teacher Kandinsky, the geometric shapes would also have an energising or calming effect, depending on the colours they were combined with. A cylinder on the bottom serves as a centre of gravity and prevents the cradle from toppling over. The re-edition is embossed with a certificate featuring the Bauhaus label by Oskar Schlemmer. Peter Keler also suggested producing a smaller cradle, which became part of Tecta’s range of licensed re-editions in 2018. 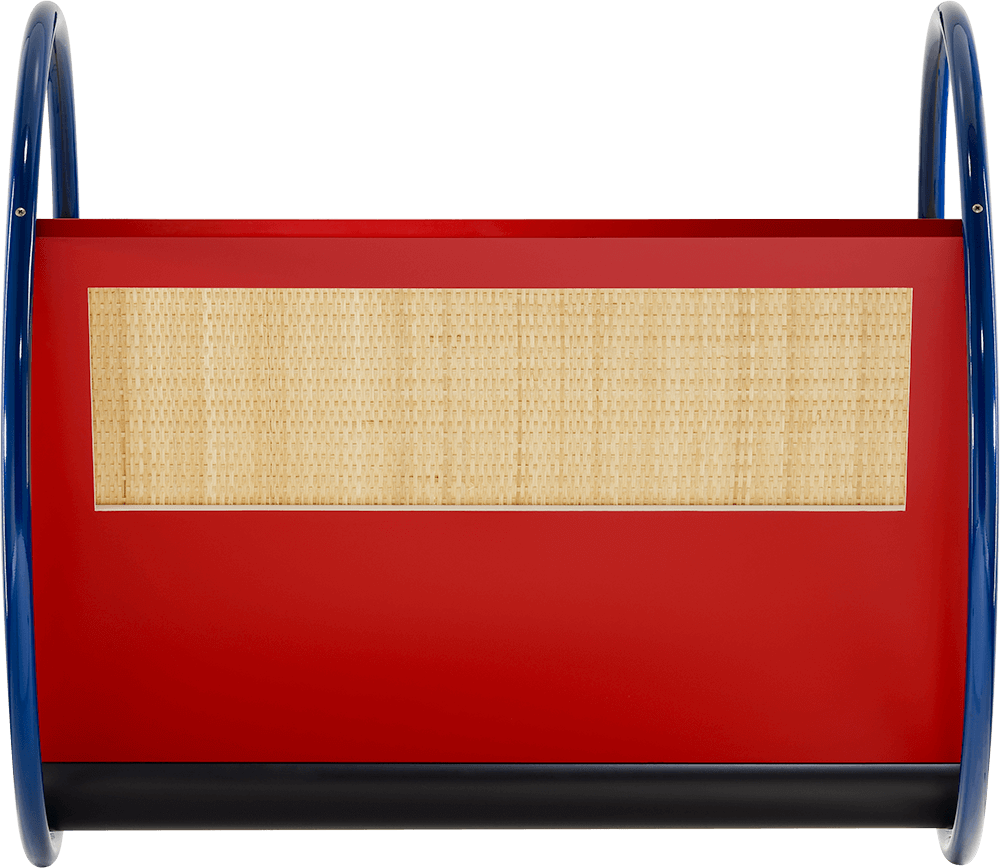 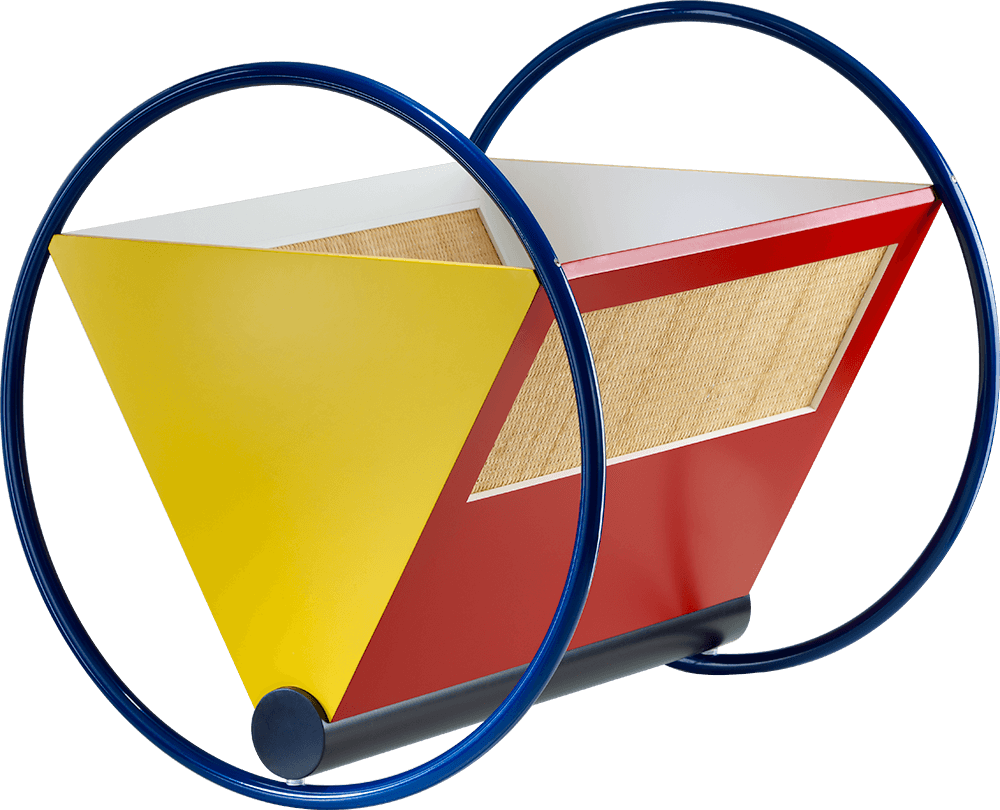 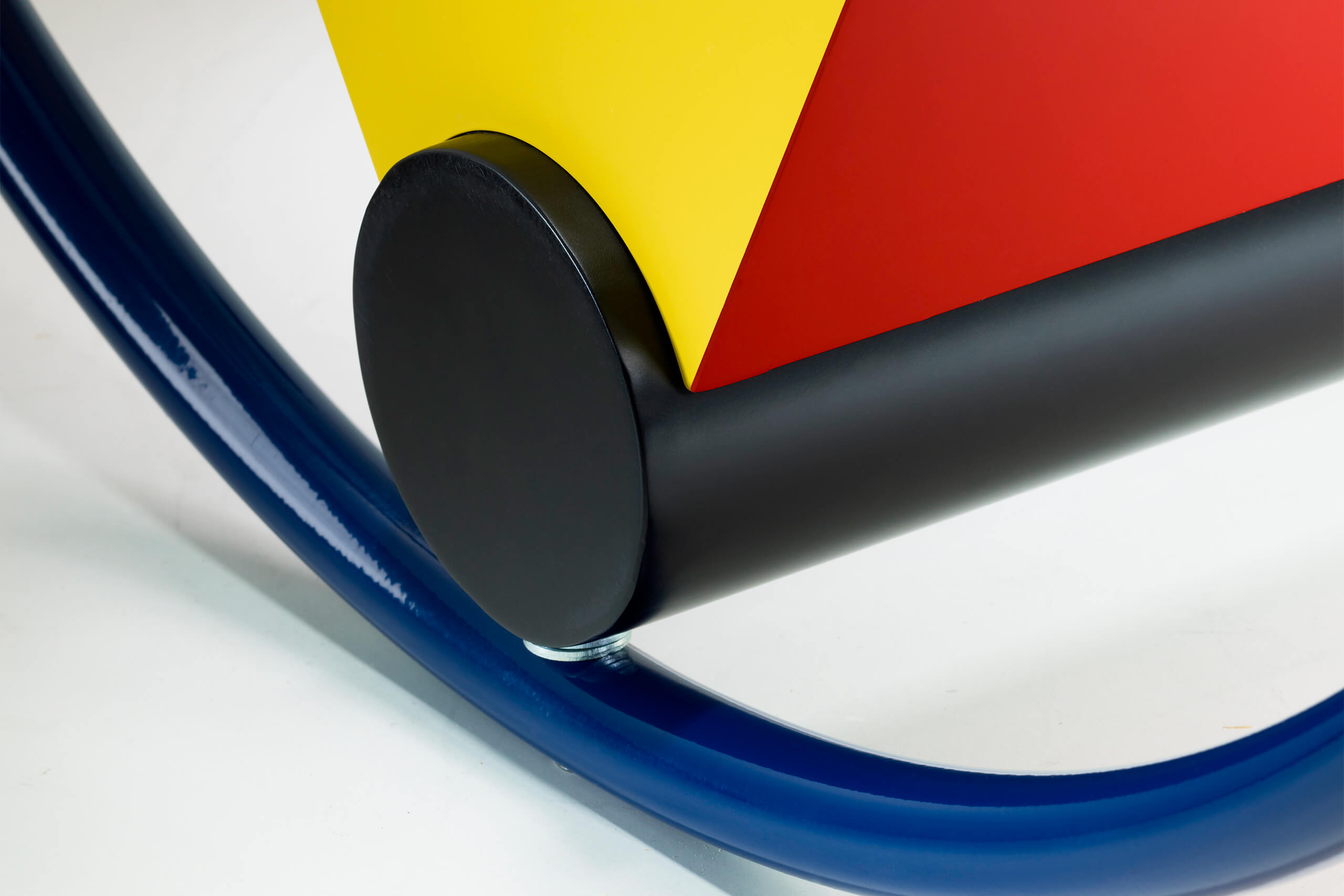 Peter Keler is one of the key thinkers who had a lasting impact on Tecta’s Bauhaus DNA. Starting with the very first contact between Peter Keler and Axel Bruchhäuser in 1975. Keler lived in Weimar, where he held a professorship at the College of Architecture and Fine Arts for many years and later worked as a freelance architect and artist. Delighted to hear that Tecta wanted to produce his cradle, he gifted his original hand-coloured design to Axel Bruchhäuser. The cradle had meanwhile become a symbol of the Bauhaus. In 1923 Peter Keler had developed its legendary design, consisting of a circle, triangle and square, based on Wassily Kandinsky’s synaesthetic colour and form theory.

One year earlier, in 1922, Keler had joined the KURI Group (constructive, utilitarian, rational, international), which was active at the Bauhaus.“My bauhaus tecta journey is still alive in all my mind and bauhaus KURI bones,” wrote emeritus professor Peter Keler about his work and annual trips from East Germany to Tecta in Lauenförde.

Born in 1898, the Kiel-native already gravitated towards like-minded thinkers at an early age. The vision of transforming all aspects of life is reflected in his work as a painter, graphic artist, architect, photographer and furniture designer. In 1921, he left Worpswede for Weimar – like fellow artist Wilhelm Wagenfeld. Peter Keler enrolled at the Bauhaus, attended the preliminary course taught by Johannes Itten, and studied mural painting under Schlemmer and Kandinsky.

From 1975 Peter Keler worked as a “tecta employee” – as he described himself – for around seven years. In 1981 he wrote to Paul Klee’s son, Felix Klee in Bern, a German-Swiss art historian and painter, signing his letter from Lauenförde with “tecta -new bauhaus” as his address. In doing so he inadvertently laid the foundations of the current BauhausNowhaus campaign, the company’s way of showing that the ideas of the Bauhaus are still as relevant as ever and must be constantly thought forward.

The friendly cooperation with Tecta’s Axel Bruchhäuser was marked by conversations, visits, letters and joint trips, for example a visit to Erich Brendel in Wedel near Hamburg. Keler also played a significant role in a rather curious story: he helped Axel Bruchhäuser obtain the prototype of the first folding chair designed by his friend Marcel Breuer. Prof. Edmund Kesting had bought Breuer’s chair from the “Neue Kunst Fides” Gallery in Dresden in the late 1920s, and hidden it in Ahrenshoop during the Nazi era, rescuing it as “degenerate art” over two dictatorships. In order to successfully ship the valuable armchair from East Germany to Lauenförde, he resorted to a trick: the old frame was declared a used clothes horse and sent to Axel Bruchhäuser’s mother. Thus, it evaded border control as a commodity. In 1976.