The D4 is a timeless classic with its own special magic, and a chair that British designer and artist Esther Wilson grew up with. It brings back memories of her grandparents, the architects Alison and Peter Smithson, who owned a D4 and collaborated closely with Tecta.

Designer Esther Wilson, who is a trained embroiderer, has therefore created a poetic thought work that pays homage to Breuer’s chair and the Bauhaus. She based her new edition on the Bauhaus Manifesto in its original layout. On a copy Wilson highlighted several words and hand-written notes, which she considered important, in different colours.

According to their positions in the Manifesto, she embroidered the resulting colour blocks onto the textile surfaces of the D4. And in doing so created intense, minimal pieces of embroidery. Works of art with a unique rhythm of arrangement and colour repetition. The sizes and proportions of the colour blocks vary according to the chair style – Wilson has customised the pattern to scale for each version. 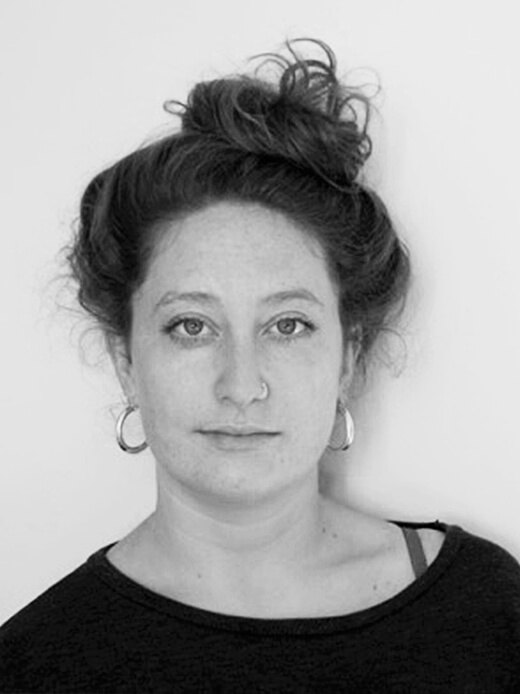 Esther Wilson, granddaughter of the legendary architects Peter and Alison Smithson, works as an artist and embroiderer in London.

Before training as an embroiderer at the Royal School of Needlework in London, Wilson completed a degree in fashion communication at the European Institute of Design in Madrid. Fashion plays an important role in Wilson’s current work. She designs and makes clothes to which she applies embroidery for international customers.

For Burberry’s The Makers House collection in 2017, Wilson embroidered cushions with insect motifs using the so-called “blackwork” technique. A form of embroidery with Arab and Persian roots, which was once used to create geometric patterns.

But even far away from the world of fashion, there have always been new and unusual collaborations where Wilson can demonstrate the versatility of embroidery: She works with landscape architect Gali Izard, for example. Esther Wilson teams three-dimensional, traditional embroidery techniques with model making to create organic and constructed tree root formations. She also came up with an unusual concept for the print edition of Bike Magazine, for which she designed 1970s-style embroidery for a headline. In addition, she teaches workshops on her modern embroidery style and concepts, for example at the launch of Threadworks in London. Esther Wilson’s works are featured in many exhibitions in the United Kingdom.

You trained as an embroiderer at the Royal School of Needlework in London. A craft that was taught at the Bauhaus but that is rather unusual today. Why did you want to learn this rare profession?
Sewing and embroidery have always rather important at home. This craft has a tradition in my family. My grandmother, the architect Alison Smithson, who developed Tecta’s “Witch House” and museum together with my grandfather Peter Smithson as well as many pieces of furniture, loved sewing. She passed on her knowledge and skills to her daughter, my mother, who in turn passed them on to me. I then decided to focus my skills on embroidery. I am very proud that I could continue this art of my family and now use it for the BauhausNowhaus project.

From the perspective of a young British designer: What does BauhausNowhaus mean to you?
Although I completed a three-year course in embroidery with a BA, my work is often graded as a handicraft or women’s work. Today’s division between arts and crafts has created a hierarchy in which techniques such as embroidery or weaving play a subordinate role. The Bauhaus, in contrast, firmly believed in the unity of art and craftsmanship and knew how to combine concept with execution and traditional techniques. This is exactly what is relevant for me in my work today.

What was your idea when Tecta asked you to create a BauhausNowhaus re-edition?
I wanted to reinterpret Marcel Breuer’s D4 and use the Bauhaus Manifesto to create new embroidery designs. The idea of editing texts in an abstract manner has been with me for a long time. It wasn’t about translating words one-to-one into stitch. My plan was only to emphasize certain passages or words with different colours and to use the resulting pattern.
Christian Drescher then sent me a photo of the original manifesto. It was important for me to see what the layout looks like – with the different font sizes and hand-written corrections. All this served as the inspiration for my new designs for the D4.

So you then marked individual words in the manifesto. Their position in the manifesto served as the foundation of your design layout, which consists “only” of embroidered colour blocks…?
Exactly. There are no words to be read. Instead individual words are represented by colours. The first version of the chair showed the words “Bauhaus”, “art” and “crafts” as three different colour blocks. I then continued working on the concept and added punctuation marks.

What does your colour scheme look like?
There are two chairs in white and two in a black fabric that are embroidered in bright colours. I love working with colours. The Bauhaus developed some fabulous colour schemes. I wanted my compositions for the Breuer re-edition to be inspired by this but at the same time look fresh and new. I created lots of different colour schemes before making my final selection. Each of the four chairs features an individual embroidery and colour concept.

How long did it take you to complete a Breuer re-edition?
The embroidery including the creation of a pattern took around 30 hours per chair.

Why did you want to interpret the Breuer chair?
I grew up with this chair. It stood in my grandparents’ house. The epitome of Bauhaus furniture. I love the layered fabric straps and the way they stretch across the steel tubes.

How is your work connected with the Bauhaus?
My designs merge art and crafts. Function, form, longevity play a major role in the creation of beautiful useful products. I like the Bauhaus approach of working with bright colours very much – that is what I try to integrate.

Do you feel like coming home when you visit Tecta in Lauenförde? Your grandparents created the “Witch House” and the museum there.
The first time I went there I was 12. We travelled there by train from London. I was spellbound by the “Witch House” with the tree houses and the undulating paths. It was magical! I was so envious of Axel that he could live there.
Tecta pays the utmost respect to the crafts and materials – this is exactly what I want to express in my work. The synergy between Tecta and my grandparents really created something that was heavenly but at the same time efficient and useful.

Do you remember Tecta from your childhood, since your grandparents and Axel Bruchhäuser were very close?
Their friendship with Axel was a very special one. It was very present during my entire childhood, be it only for the postcards, funny drawings and work ideas that they exchanged. Axel Bruchhäuser can get really excited about new ideas and projects. Even about a “chair essay” I wrote as a child. By the way, I am working on a Smithson project right now – documenting their Christmas cards. Axel Bruchhäuser was a great help with this. We write each other e-mails, compare images and photos. It’s a great thing that I can continue the friendship between my grandparents and Axel.